North Kensington in West London changed forever following the Grenfell Tower fire disaster of June 14th this year. Already known for its street art, the area’s walls have become a canvas for tributes to those lost in the fire, a space for free expression and to vent rage, without a media filter. A semiotics expert and local resident, Chris Arning, looked at the possible meanings and genesis of a striking example of post-Grenfell North Ken street art…
What is Semiotics?

Semiotics derives from the ancient Greek word semion, meaning ‘sign’ and is a subject devoted to evidence-based analysis of signs and meaning. It is a field that encompasses culture, communication and meaning and includes logos, branding and street art. 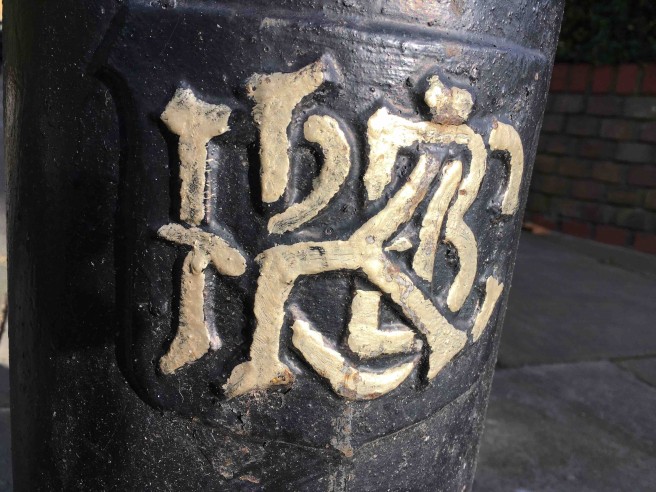 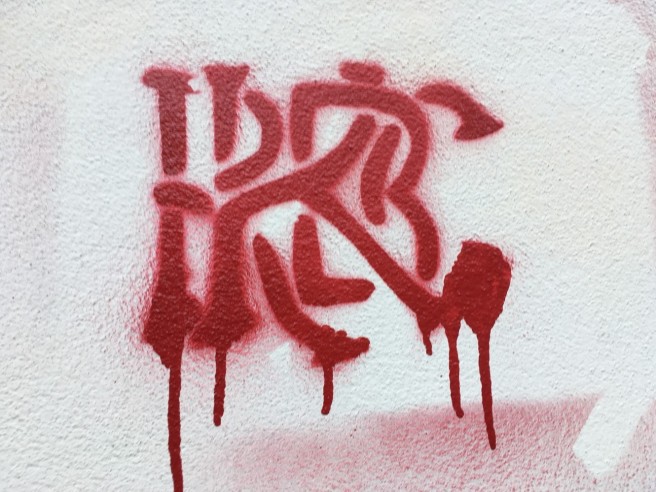 North Kensington is replete with street art. Of course there is always a flurry of artists before carnival every year, but since Grenfell in June, a lot of other types of pieces have appeared: the modified London Underground Love sign and a great Grenfell RIP on the corner of the Acklam Road on the left as you turn off from Ladbroke Grove towards Portobello – done, I think, by Code FC. Street art is the medium and message of anonymous resistance. It is done to show that whatever the official story, the streets is watching and people know what is going on – sgraffiti means ‘scribbilings’ (from the Italian sgraffio, to scratch) something that goes back at least to ancient Rome.

On the way home a few weeks ago, I happened upon a strange sign on a wall off Powis Square. It sort of stopped me in its tracks because there was an uncanniness about it, both familiar and eerie. I’m writing a book on semiotics at the moment, as you do, and I was intrigued so thought I’d take a pic and have since pondered what it might mean. I deciphered the letters tangled up together as RBKC. This is the old logo of the Royal Borough of Kensington and Chelsea. You can still see it on some of the street signs of the borough.

I have reproduced the street art above, alongside an embossed version on a local street light.

As Tristan Manco, author of Stencil Graffiti writes: “Stencil art poses many questions. Who was the creator? When did the image appear? What is the concept behind it?… Graffiti is also a uniquely criminalised art form…the audience feels part of something which is both personal and subversive.”

Why would a street artist want to borrow the identity of the Borough of Kensington and Chelsea? It is not the most exciting organization in the world to emulate, and the mark is placed on a wall within the Borough itself so is not there to identify where we are; this sign provides no useful informational function. When I put my semiotic hat on, the penny suddenly dropped. I realised that this was a scurrilous but angry appropriation of the Borough emblem. This is a case of anti-brand communication, in the tradition of the culture jammers, Adbusters – with their iconoclastic black spot symbol.

Amit Kucuk, in a paper on anti-brand initiatives, writes: “If a decoding consumer dislikes the brand due to bad experiences, resisting reading can eventually open the door to direct semiotic attacks by the consumer. A semiotic destruction of company-generated brand meanings is intended to destroy corporate brand value and identity by dissecting and recoding corporate messages with informative and sometimes humorous subvertisements and/or counter advertisements (Katyal, 2010; Krishnamurthy and Kucuk, 2009). This is conceptualized by Kocuk as ‘‘consumer-generated, antibranding semiotics’’ or as ‘‘consumer anti-branding semiotics.’’

Kocuk writes that anti-branding is a form of brand activism that expresses dissatisfaction through creating a perverted clone of the original logo, as a way of appropriating their visual identity, but that toxifies the brand reputation by seeking to degrade the symbol’s positive meanings and to replace them with negative associations.

What is unusual is that this tampering with the official designs of brands is usually done through Photoshop and digital manipulation and dissemination online,  but in this case it was through a stencil directly on the wall. Old School!

In this case, we can infer that the symbol is an attempt to subvert the Council’s exclusive control over their trademark, and in doing so to impugn their authority. Replicating a logo is of course a challenge to intellectual property if it is a registered trademark. And this has a symbolic importance when you consider the context.

This sign appears in an area that has undergone the trauma of the Grenfell fire disaster and where much anger persists towards the council and their officers. This was a disaster in which the Borough was widely criticized for its numerous failings, not only pertaining to fire safety standards, but also towards disaster recovery in the aftermath. There was a lack of action, a lack of accountability, a lack of transparency, in short, a total lack of leadership. In the aftermath of Grenfell, local volunteers, religious groups (Al-Manaar cultural centre needs to get a shout out here for having a relief centre set up hours afterwards; as the embers still burned) took up the slack and delivered relief as far as they were able, while the council dithered. Other councils and entities took the initiative and RBKC’s belated efforts were deemed to be too little too late.

Once we have the context, the sign makes a lot more sense.

We can infer that the author of this sign borrows the old logo and takes liberty with the rendering, as a way of exposing the Council’s true colours. Implicit in the creation of this sign is a sense that the council, through its sins of omission and commission have abdicated their right to wield their authority responsibly. Others have had to step in to compensate for their incompetence; their visual identity deserves to be similarly treated.

It is in daubed in red, and paint drips from the ends of the letters (whether deliberately or not). The red could allude to the capture of the parliamentary seat for the Labour Party in the 2017 general election. But it is more likely to refer to blood: the blood shed in the fire, thus insinuating the stain of culpability onto RBKC. In her recently published report, After Grenfell: Housing and Inequality in Kensington and Chelsea, the newly-elected Member of Parliament for Kensington, Emma Dent Coad writes that RBKC is ‘the most unequal borough in Britain’:

“Kensington and Chelsea is a microcosm of society at large. It is a place where inequality has become a gross spectacle. Where childhood poverty, overcrowding and homelessness live check by jowl with opulent second homes, palatial apartments for the mega rich and vast outflows of rent to corporate landlords.

The proximity of huge wealth attracted by an over-heated international property market unencumbered by taxes, alongside poverty so extreme is a scandal that brings shame on our society in 21st century London”

Again, Kucuk writes: “the color codes used by anti-branders demonize corporate meanings and indicate that these consumers are both passionate about their views and are feeling sad, depressed, and frustrated by the actions of the targeted corporations.” The livid red blood dripping off the iron grilling of lettering is strident.

The choice of a monogram may also carry significance. Monograms are a special type of logo they tend to be ersatz signatures, often the preserve of privilege and power interests. Mollerup writes:

“The original Greek meaning of the term ‘monogram’ is ‘single line’…normally used to indicate a design made up of the initials of a person’s name…a Royal monogram signals both authority and ownership”.

The nature of monograms do not lend themselves to connoting universal values and it is the opposite of transparency and openness. It is more fitting as a logo for a brand whose mission it is to perpetuate privilege.

This therefore reinforces my ‘preferred reading’ so far of this small sign’s intended message: a forceful implicit critique of unaccountable power. Charles Peirce wrote about a sign as ‘standing for something to someone in some respect or capacity”.  This sign stands to whom in what respect or capacity? To the average tourist it is an innocuous sign; but to this local resident alive to the communication context, it is a politically and ideologically charged sign, condensed social commentary and perhaps a harbinger of more trouble to come.

Chris Arning is a blogger, poet, creative, semiotician and has lived in W11 since 2003. He is working on a book entitled How Brands Have Meaning: Commercial Semiotics to be published by Edward Elgar in 2018.

He can be contacted at chris@creativesemiotics.co.uk

Mollerup, Per Marks of Excellence: History and Taxonomy of Trademarks (Phaidon: 1997) 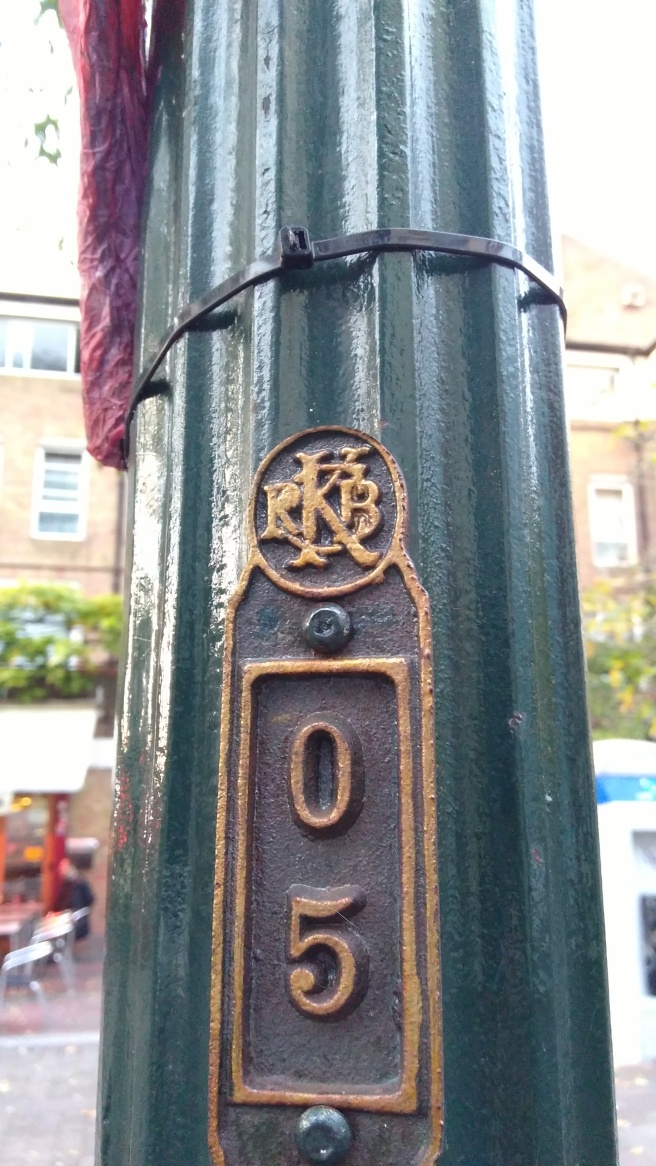