It’s 11.45am on a Tuesday in March and I’ve just come back to Portobello after moving some things into a Brentford storage unit.

Heavy work, so you’d think a full English carb fest was on my mind. Not so, here’s why…

…So, we get to the door of the Electric Diner on Portobello Road, only to be greeted by our regular (Antonio Banderas looking) waiter.  I may have appeared a bit rude as I zipped past him fully aware of the clock ticking away on our 50% local discount deal as it fast approached 12.00. I rushed past into the ready and waiting waitress. “Will you still honour the discount as it’s not yet 12 O’ clock”?  I said in a half couldn’t care less way, without revealing the fact that her answer was a remote control to push an invisible button to send me away or make me stay, just like a puppet”. ” If you order before 12.00 it’ll be fine”. She said. You’ve never seen a person sit down so quickly. 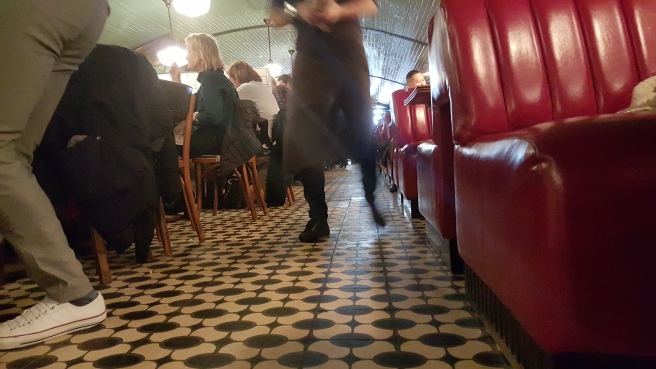 It was about 11:52 when my guest: sweet Juliet ordered her poached eggs on toast with  avocado and a bit a lemon on the side, accompanied by a pot of mint tea to kill the chill. Note below, the avocado’s succulence. END_OF_DOCUMENT_TOKEN_TO_BE_REPLACED

For Rob – “Hold it lightly”

Walking down a busy London street, having just done one task, another to do, plus my whole life to sort out, my mind was on repeat: I’m gonna do this, gonna do that; I’ve gotta do this, gotta do that. It was not a welcome state of mind.

Another day, same grey stretch of road, a feeling of heaviness is on me, and the same fraught thoughts of what-to-do; dis-ease. Earlier that day I had been fine and dandy, so I wondered why this disquiet had attached itself to me again.

I couldn’t name the sensation and the confusion only made it worse. If I’d known what was going in, I wouldn’t have minded so much. Then I remembered something that was explained to me many moons ago: The three gunas. I understood my agitation immediately.

According to Hindu philosophy, the three gunas are the three aspects of energy that are everywhere; within us, surrounding us, defining everything here on Earth and beyond. They are qualities of being, said to underlie all natural phenomena. They are rarely spoken about here in the UK, but they are an effective way of describing the full spectrum of emotions and states that we encounter.

The three gunas are known as:

Sattva, the guna of light, in both senses of the word. It provides enlightenment to a person’s mind and it also increases light heartedness. In these ways Sattva is associated with happiness, creativity, bliss, inner stillness and alertness. You can never have too much Sattva.

Rajas is the guna of movement. In a human, it could refer to body or mind. We all need to move, anything we do requires rajas, but as we gain momentum, rajas can become too strong and we become agitated.

Tamas is the guna of heaviness, resistance, fatigue and inertia, counteracting rajas. A surfeit of tamas means sloth, boredom or atrophy.

I’d been told about the gunas some years before my satori, and had occasionally thought about them, identifying a scenario and then asking which guna best described it. After a big lunch – tamas; commuting – rajas; writing, drawing, connecting – sattva.

According to Hindu philosophy, the gunas come from the divine, or the unmanifest, oneness, no-thing, the absolute, God or insert whichever name is appropriate. The gunas are in all beings and in all nature. The three are always present in combination, but one will predominate at any given moment. END_OF_DOCUMENT_TOKEN_TO_BE_REPLACED

My Tweets
The skeptic's kaddish