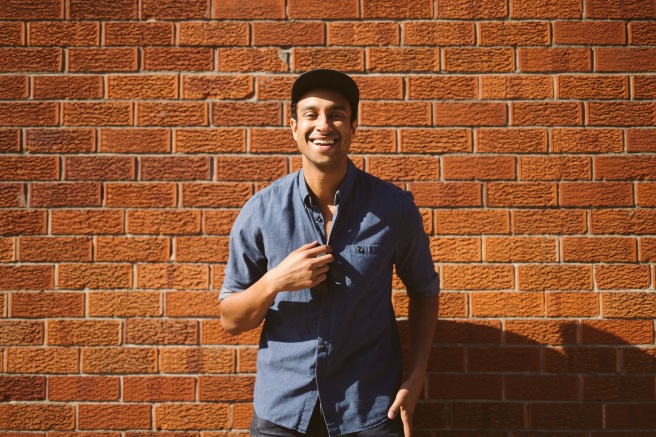 At first glance, it is difficult to imagine Matt Okine having the discipline and drive to rise in the early hours for three straight years to host a national radio breakfast show. His easy style and unflustered lyricism belie what must be a fierce work ethic and creative urge. But this is what Okine does: laziness is his mask, the lie that he uses to present his truth.

The Australian is much decorated and lauded for his acting and stand up, and is a serious all-rounder: he presents a cookery programme on TV and raps as part of Boilermakers. Okine’s success sees him sell out comedy shows wherever he performs and now he is back in London at Soho Theatre, ostensibly talking career changes, but there is much more simmering under the surface in his show ‘We Made You’.

The opening night at Soho saw Okine in full flow for a full hour. This was a comedian who delivers with clarity and panache. Virtually non-stop, the intensity of his performance was complemented by his laid-back style, giving him an authentic edge, sympathetic and apparently very real.

There was a conspicuous lack of confrontation during Okine’s hour on stage, with any aggression reserved for rants at potatoes, crabs and other sources of nourishment and irritation – food being his favourite subject. His charming, disarming ease with the audience meant the Soho Theatre was quickly relaxed, with plenty of laughing out loud, while Okine kept an emotional distance, never quite straying in to vulnerability, although he hinted at pain throughout the hour.

Matt Okine’s light touch works as a layer above an undercurrent of tension. He expressed a struggle between the real person and the personality adapting to the modern world and its absurdities. The silliness of mainstream popular culture formed the basis of Okine’s act: exotic crisp flavours, eight-hour binges on TV cookery programmes, social media and the rest. All this was done without criticism, Okine being the passive and innocent consumer, with the effect of him being far funnier than any comedian attempting to intellectually deconstruct consumer culture.

Okine occasionally juxtaposed his light-hearted observations with revelations of his inadequacies and insecurities: body image, hair loss, ethnic identity and facing his contradictory relationship with his father. What can you say and what can’t you say? Again, the tension between being authentic and adapting to modern life, with the mask of a media savvy, successful 30 something.

There is something of the nihilist in Okine. Or perhaps it is that he reveals a strange western digital age mass nihilism in which we have so little control over our lives and environments that we sink into the minutiae of our particular preferences and irritations as a way of avoiding the facts of our mortality and the moral bankruptcy and degradations of consumer society.

Whatever, he’s very funny, a natural, and this show is highly recommended.

See Matt Okine: We Made You, at Soho Theatre, London until 29th August.