North Ken News is a Kensington & Chelsea Council magazine, delivered to thousands of residents in the borough’s less affluent wards. Ill-conceived and half-heartedly produced, it typifies a local authority lacking the ambition to truly change following the Grenfell Tower fire.

In January 2019 Kensington & Chelsea Council (RBKC), after holding ‘Creating Stronger Communities Conversations,’ produced its Grenfell Recovery Strategy, saying the document “demonstrated a strong desire” on the part of local residents “to shape recovery directly, building on the existing strengths and talents of communities.”

The aspirations RBKC identified in its consultations with locals included:

North Ken News, along with other mass distribution puff pieces, are RBKC’s responses to the frustrations raised about the council’s communications. These publications amount to little more than public relations for a disgraced local authority. A true provider of grassroots news and analysis, the blog THis Is North Kensington summarised North Ken News as “PR self-analysis of the supposed Grenfell Strategy.”

At £93,684 of public money a year, North Ken News’s budget comes out of the £50 million (over five years) Grenfell Recovery Fund. But the ostensible aim of RBKC to make the magazine part of a dynamic new approach to the north of the borough has not been fulfilled. One Conservative councillor described North Ken News as “propaganda.”

Launched in 2019, initially monthly but now bi-monthly, the publication’s stated purpose was to provide “more information about what is happening in the local area.” RBKC claims it is “very much shaped by content and ideas from the community.” Both claims are themselves propaganda. North Ken News provides information about what is happening, but only on the condition that it is council-funded or poses no ‘threat’ to RBKC’s power.

The magazine doesn’t credit any contributors or editors, but according to THINK, RBKC’s Head of Grenfell Communications, Kirsty Tobin, fulfills all such roles. On her LinkedIn profile, Tobin states: “In the current media environment, one of the fastest and easiest ways to ensure that people return to your content again and again is to make it of the highest quality possible.” Let’s see how that’s going…. 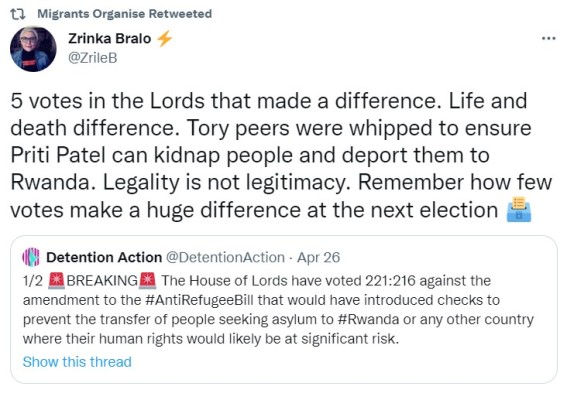 For those who genuinely care about the victims of war, Migrants Organise is a fearless and effective local charity. A fundraiser was held for them in the borough in April, exactly the type of event not promoted in North Ken News.

On page four, there’s the news that the fantastic local organisation Fit For Life Youth is moving to Freston Road. There’s a feature on the local elections with no mention of the choices North Kensington residents had or how this election might impact them. Of course, the last thing RBKC wants is for migrants to be organised and build their own power bases in the borough. A serious publication might have linked the two stories to inform readers that the year after the Grenfell fire, RBKC cut £1.1 million from its youth services budget, thwarting the efforts of genuine grassroots organisations like Fit For Life Youth.

Page five is pure propaganda about the annual report on the Grenfell Recovery Programme. Page six outlines some ‘New Grenfell Recovery Projects’ but they are just employability programmes with little or no obvious connection to the fire. Then a splurge of vagueness with “consultation and engagement,” “celebrating young people’s voices,” and emotional support being “reshaped.”

On page nine we’re informed about the government’s consultations on the future of Grenfell Tower. North Kensington residents can engage with Secretary of State for (so-called) Levelling Up, Housing and Communities, Michael Gove, who will “hear their views.” The dynamic is set: without real power, North Kensington has to hope that politicians with appalling track records will suddenly develop consciences.

In this case, Gove is the politician responsible for the Prevent Strategy that has wreaked havoc on the lives of many British citizens, created from the 2013 ‘Trojan Horse’ letter, which has been proven to be a hoax. A genuinely community-minded magazine might have warned local people about who they are being invited to engage with.

Page 10 is a standard local newspaper story on a children’s drawing competition. Followed by more “consultations” on p.11, with the Grenfell Nursery being rehoused in Ilys Booker on Lancaster West estate. Residents of the estate told Urban Dandy last year that the council had been delaying allocating the nursery a new home, hoping to keep it on Lancaster West, to evade the expense of building on private land.

Money is the focus, with the words ‘invested over £2m’ in bold. The words ‘of residents’ money’ are omitted.

North Ken News is a long and boring publication. By p.12 its determination to provide only good news is almost overwhelming. To read it is to step into another version of reality.

A feature on the annual Mayor’s Awards and quotes from grateful recipients is next, then the “co-designed” Grenfell Projects Fund 2, which had pitted resident against resident in a battle for £600,000 of public money. North Ken News omits the fact that the funding was not allocated according to the Council’s guidelines for applicants. But more on that another time, maybe.

Page 14 features an image of a man who looks about 30 in a state of apparent euphoria at the news that an apprenticeship could be “the ticket” to his “dream job.” What are the chances of such a feature making it into a South Kensington publication?

You can read the April edition in full here. You might notice that there’s a lot missing. The Curve being closed; the cost-of-living crisis; the Grenfell Inquiry; anything empowering; ‘Free Billy Hood’; any unfiltered resident voices; any projects not funded by RBKC; any information on how to engage with local democracy (beyond voting); the local MP’s voting record; councillors’ voting records; an event at the library on the history of social justice campaigns in North Kensington…

Does North Ken News provide “more information about what is happening in the local area”? And is it “very much shaped by content and ideas from the community”?

Both claims are disingenuous. There is information about some things that are happening locally, but they reflect the worldview of somebody who relies on RBKC for their salary and has no appreciation of the local culture. As for being shaped by the community’s content and ideas, this is false. I threw North Ken News a softball community event via email last year. Nothing that could be perceived as political or adversarial, but also not a council-backed project. I didn’t get a reply.

At face value, the target audience of North Ken News is people who are only interested in aspects of local life that are administered or funded from the Town Hall. Given that that demographic doesn’t exist, it means the real target audience is somebody else…

A civil servant in the Department of Levelling Up, Housing and Communities looks at a spreadsheet of RBKC’s progress since June 2017. He reads the line ‘Improve Council Communications with Local Residents.’ He looks at North Ken News, shrugs, and ticks the box.