By Ivor Flint and Joseph Rodrigues 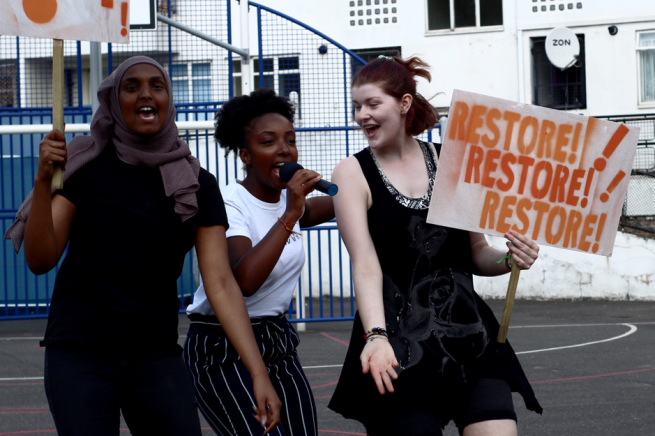 SPID (Social Political Innovative Direct) Theatre is in a nationally renowned, charitable theatre company based at a community space beneath Kensal House, a social housing block on Ladbroke Grove in North Kensington. SPID works on other estates too, on participatory youth performance projects aimed at regenerating community spaces. In summer 2019, SPID was awarded almost £2.5 million in funding to refurbish its Kensal House headquarters. Some Kensal House residents have opposed the refurbishment and SPID’s landlord, Kensington and Chelsea council (RBKC,) appears set to block the renovation…

We are writing on behalf of the residents who support SPID Theatre’s refurbishment of Kensal House community rooms, as shown in our film. SPID is a mixture of residents and professionals who use local roots and national profile to champion high-quality community theatre on council estates. We are lucky to have had them here on our estate for fifteen years, making interactive youth shows which advocate for social housing.

Restoring and improving Kensal House estate community rooms is a dream we’ve shared with SPID ever since we asked them to run the neglected space. Four years ago they started fundraising for what we see as incredible plans. By June 2019 they finally confirmed an award of funding of £2.4 million from the London Mayor, the National Lottery and five other non-council funders. When RBKC refused permission – first for planning in Sept 17th 2019, and then for landlord’s consent December 31st 2019 – we took action at Kensington Town Hall.

It had been a tough day, mopping up leaks in Kensal House, an estate riddled with flooding pipes that force residents into temporary accommodation, despite our appeals to our council landlord to fix them.

Shivering in the shadow of Kensington’s town hall, it was a relief to be allowed in to appeal at planning committee. But once the hearing started, our ‘SPID stands for solidarity’ t-shirts felt flimsy and cold. ‘Helena Thompson is not a resident,’ said the first to speak against us. This opened the floodgates for others to attack SPID’s artistic director.

The sad fact is that here in North Kensington, infighting is rife. Thirty-one months on from the Grenfell Tower fire, the total absence of any justice is traumatising and re-traumatising the area. It suddenly matters how ‘local’ you are – with different factions competing for status while survivors, bereaved and affected local people continue to absorb insults from the national government. Here, Residents’ Associations are set against each other as if they are rivals. Here, leaders of faith and managers of community spaces are punished for working with the ‘wrong’ groups’. Mental health and trauma are the elephants in every North Kensington meeting room, yet RBKC imposes austerity including in its mental health budget.

The borough’s planning department had bowed to an onslaught of local objections which painted the charity we know and love as cutthroat, outsider property developers. Those who appealed to speak for SPID were cut off after just two minutes. We closed our eyes, and waited for the axe to fall…

The chair summarised the objections. He understood the concern over the extension into their communal garden. But in reality, changing the garden’s layout would not reduce it as the extension occupies one-tenth of the garden, with all green space to be replaced by extending the greenery. He listed the benefits: a new community space; investment that only a charity could secure; free activities for young people. As the councillors slowly raised their hands, the final vote swung things in our favour. In the silence, time seemed to stop.

We remembered all the changes SPID had been asked for and made. The escalating jealousy over the chance of investment, the endless objections to everything, from disabled access to building works. We were relieved, but we also felt loss, for the love that North Kensington estates had always stood for.

SPID’s youth, advocacy and living history work are all about that fellowship. They champion social housing for the unique way it stamps community itself into architecture. This is where the union of people and place and time is most sacred. And this is what we stand to lose if we let the community divide and destroy itself at the time we most need to be strong.

We will always stand by SPID, and be forever grateful to the people who do the same. We are sorry for the misplaced frustration they’ve suffered, for the bullying and false accusations. We share their passionate conviction that community investment in social housing benefits everyone. But SPID have shown us that suffering a hate campaign does not have to mean reciprocal hating.

And now we have a new challenge and we are prepared to stand with them and to stand firm. On the eve of 2020, the council decided to deny landlord’s consent because of objections already addressed at the town hall – the plans have listed building consent, and support from Historic England, and cannot be altered again without losing funding.

For no benefit, RBKC’s decision to withhold sacrifices everything. It means the community rooms will continue to deteriorate and become unsafe as Kensal House and SPID’s shared heritage continues to decline – with frequent leaks, ancient electrics, no disabled access, and blocked fire exits. Kensal House residents will no longer receive investment to spend on improving their neglected homes and the communal benefit for the whole estate will not materialise.

There will be no additional space available when the hall is booked, and local people will be deprived of paid work placements, new jobs, and free business mentoring. Local youth will be deprived of free drama, heritage, sports, filmmaking and homework clubs. In short, an area that is suffering a £1.1 million cut to its already insufficient youth provision, is about to spurn a substantial financial injection.

The prospect is heart breaking. After 15 years of fighting for investment in social housing, SPID had raised unprecedented funding from the Mayor and the Lottery, with no help from RBKC. The theatre even pledged their own reserves towards improvements for the whole of the estate. SPID asked the council to invest at the same time by finally doing their statutory duty and bringing all of Kensal House up to standard. Instead, RBKC rejected a timeline to fix the estate’s leaks and vetoed the urgently needed refurbishment.

Residents For Refurb was set up with support from SPID’s Estate Voices program to challenge this decision. We believe that if the council listened properly to North Kensington residents, they would have fixed the chronic leaks on the whole estate, consulted with the thousands of local residents who use the space each week, and granted consent for the urgently needed refurbishment. There is a petition to restore the dignity Kensal House community rooms deserves by finally giving this crumbling building and local young people a future.

RBKC’s dithering and lack of leadership over SPID suggest a strategy of divide and rule by the council in this proud community. Millions of pounds can fall by the wayside and there is no formal process available for the tenant to challenge the landlord. There is however a deadline of 31st January for us to persuade the council to reverse its denial of consent.

As it stands, the future direction of SPID theatre and Kensal House is dictated by how RBKC feels, politically. Their claims of wanting to improve North Kensington appear hollow and their track record of overseeing managed decline does not give us cause for hope. But we will continue to push for positive change in North Kensington. Will this council, for once, show some leadership?

Ivor Flint and Joseph Rodrigues are residents of Kensal House

Haiku out of Africa

The World’s Oldest Psychic Newspaper. Your One Stop Source For Local London News.

Thoughts on my life... by Donald B. Wilson

Australian Traveller that loves to "Roam" our globe, creator of ENDLESSROAMING.COM sharing the experience through word and photography. Currently residing in my home of Newtown Sydney but hope to be back on the road late 2020. Feedback / questions are more than welcome, happy travels