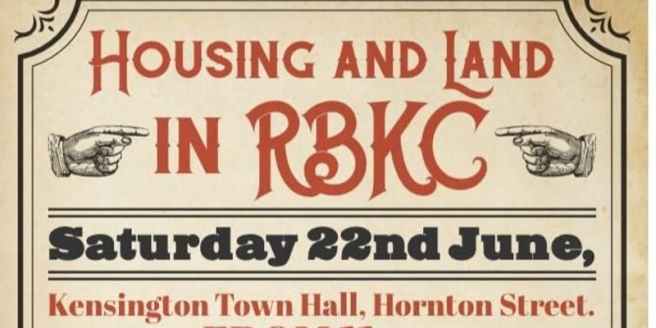 One week after the second anniversary of the Grenfell Tower atrocity, local residents and campaigners are holding a day of talks, workshops and film screenings about the housing crisis in Kensington & Chelsea.

The event takes place at Kensington Town Hall and will be hosted by Save Earl’s Court Supporters Club; Save Silchester; T.H.I.N.K., Westway 23 and supported by the Radical Housing Network. Below is their summary and here is the link to register for a free ticket: https://www.eventbrite.com/e/housing-and-land-in-rbkc-tickets-62845738295?aff=ebdssbdestsearch

Two miles from Grenfell Tower lie 22 acres of empty land that used to be the Earls Court Exhibition Centre. A venue that brought over £1 billion a year into the economy. Knocked down to make way for a luxury housing development. Public land given to private developers to build for the property speculators on and off-shore in a Borough where public land is constantly under threat from the council and private developers. A development with zero social housing planned whilst families from Grenfell still live in temporary housing. How is a council that has failed to react to the housing crisis going to deal with the climate crisis? All development and buildings now take place in the context of the climate crisis.

This event asks the questions; how did we get into this situation? In the context of the climate crisis and Grenfell how should our land and housing be used? What does our community need?

The Attack on Public Housing

Housing , Land and the Climate Emergency

Speakers confirmed so far include:

Thoughts and notes from Cllr Nick Paget-Brown, Leader of the Royal Borough of Kensington and Chelsea