Conspiracy definition: “the act of conspiring together”

The Coronavirus crisis has been fertile ground for the conspiracy theorists among us. Yesterday 260 people died from the virus in the UK, but some people still refuse to take it seriously. Before, they were bores, now they’re dangerous, to themselves and their communities.

There seems to be a high concentration of conspiracy enthusiasts in Notting Hill and North Kensington – I’ve listened to them banging on for years, with fantasies about global control from the masons to the Illuminati to alien lizards. The focus on outlandish, sci-fi conspiracies is troubles me, especially when there are so many actual conspiracies in the world that they could give their energy to.

Actual conspiracies are usually plans to increase wealth or power for a small group, with destruction, violence or misery for other resulting…

The conspiracy of corporations and governments to permit our environment to be destroyed to increase profits and power for a very few people; this same precise environmental vandalism could explain the emergence of deadly modern-day viruses including COVID-19; there is an ongoing conspiracy to overthrow the Venezuelan government; the overturning of Bolivian democracy; the NSA spying revelations; the Iraq war logs; on a subtler level there is the establishment-media coalescence around discrediting Jeremy Corbyn or the political and legal steps taken by the UK government to keep selling arms to Saudi Arabia, prolonging the humanitarian disaster in the Yemen. Much closer to home, there are enough examples of local authorities being in bed with property developers while residents suffer in inadequate homes…

But these actual cases are too real for the theorists. They’re parochial, mundane, too closely associated with ‘mainstream’ activism or they present too much of a real-life challenge: a call to action to actually do something to oppose the injustice. But this implies effort, collaboration with others and, potentially, defeat. Easier to hide behind a phantom.

The conspiracy theorists, a loose collective of manipulators and naïve lost souls, focus on vast global plots carried out by unknowable diabolical masterminds: the American government carried out the 9/11 terrorist attacks; ‘chemtrails’ are poisoning us all; “they” (aka Jews) control the media, financial and government systems; Wikileaks is “Zionist propaganda” and many serious losses of life (including the Grenfell Tower fire) are put down to ‘crisis actors’.

Their stories have always been absurd, desperate, ill-judged and offensive, and now they have seized on the Coronavirus…

The conspiracy theorists have never been able to explain why they don’t act to protect themselves and the people around them from the menaces that surround us. Hardcore theorists will never acknowledge the work of journalists, publishers or whistle-blowers in exposing real conspiracies; they will dismiss these heroic people as government (or lizard) stooges and dismiss anybody who supports them in the same way they dismiss those who question their fabrications: “narrow-minded”. This phrase is the weapon of choice, as nobody wants to be called narrow-minded, so while we scramble for a comeback they change the subject away from their responsibility to provide evidence.

This message came through yesterday on a local Coronavirus WhatsApp group: 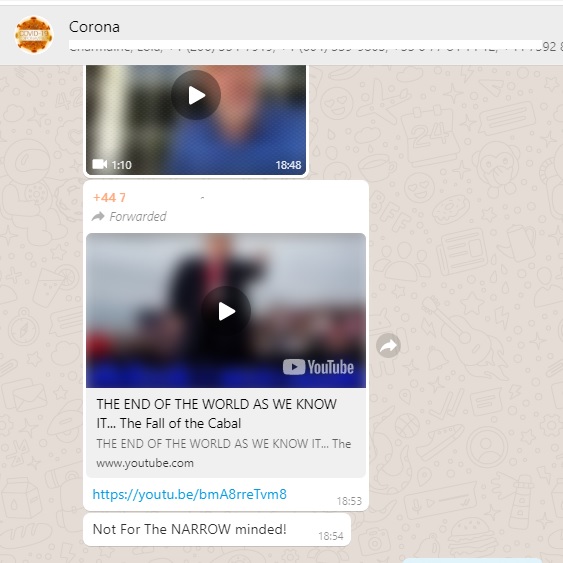 I had only paid any attention to the group because somebody I care about dearly had posted something and when I’d clicked on it, it had turned out to be a racist, pro-Trump propaganda piece attempting to cast doubt on the veracity of the known threat of COVID-19:

Now, this friend is neither racist nor fascist and is pretty much the opposite of the greasy-looking, dead-eyed propagandists in the screengrab above. But she had been hoodwinked into believing this stuff can help explain the Coronavirus outbreak, having been softened up by years of ‘chemtrails’ conspiracies and a sense that some obscured force, beyond our grasp is out there manipulating us all.

Like the oily men above, the leaders of the conspiracy theory movement share other characteristics. They all speak with a similar tone, using a strong and defensive pitch. It doesn’t require a polygraph or body language, vocal, or psychological analysis to approximate their pathology: these people are emotionally shutdown, deeply hurt liars acting out childhood pain on the biggest, most ridiculous stage available to them. Sound familiar?

But with the Coronavirus, the chickens are home to roost. Years of spending cuts (incidentally, the cuts are of no interest to the conspiracy theorists) mean the NHS is stretched to its limit and the police numbers aren’t there to administer the lockdown effectively. The chickens, too scared to face reality, double down on their beliefs.

The popularity of conspiracy theories means millions of people are not taking this crisis seriously. The harmless have become the dangerous. Now preyed upon by the fascist right, their overwhelmed minds hear only the narrative that they want to hear: the narrative that absolves them of any need to act over the Coronavirus and, worse, of all responsibility to their community. Instead, pathetically and perilously, they self-elevate themselves as an elite group who know what’s really going on…

These people, and I’m sure I have friends among them, are unlikely to be distancing or isolating. Their children will be roaming free, spreading the virus, parents sitting back on social media absorbing and regurgitating the hateful propaganda, perhaps sneering as us non-believers miss their point entirely. You could even call it a conspiracy to spread the virus.

Instead of humouring them, we should have shut them up years ago. This cult, a poisonous blend of the calculating and the witless, will be responsible for avoidable deaths in Britain in the coming days.

Thanks to JC for the edits and support x