Norland Ward in Kensington & Chelsea is 0.2 miles from Grenfell Tower. In a rational political culture, local politicians seeking election in that ward on Thursday would express support for the victims of the Grenfell fire and solemnly vow to address the worsening economic and social inequality that characterises North Kensington. But in the Royal Borough, pushing policies of injustice and inequality can guarantee you a safe seat, as the Tory candidates make clear in their campaign literature.

We previously looked at Kensington & Chelsea News, the local Conservative Party’s main election propaganda, which sets out their key policies: bin collections, borough-wide parking permits, clean air, low council tax, saving the local police station and money for parks. While some of these pledges are contradictory and some are probably fibs, they are accompanied by the biggest profanity of all; council leader Elizabeth Campbell claiming that “continued support and meaningful recovery for the communities most affected by the Grenfell tragedy will be at the heart of everything we do.”

The election propaganda for Norland Ward is more of the same, talking up the threat of a Labour-run council, promoting absurd policies, and ignoring residents in the north of the borough. Even though Norland’s boundary reaches into North Kensington, there is no mention of Grenfell or the poverty that plagues the area. 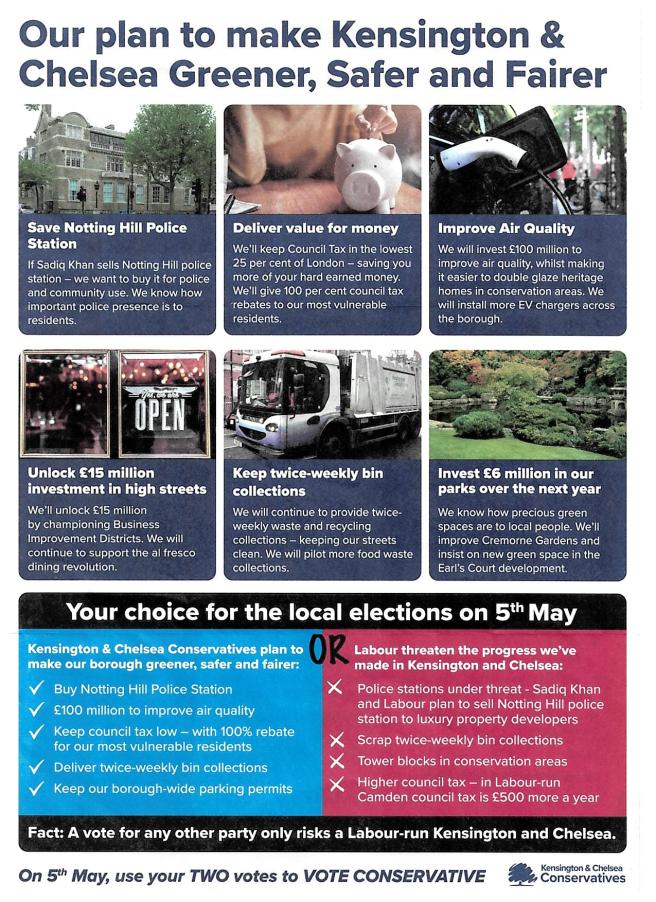 The Conservative candidates, Stuart Graham and David Lindsay, have ultra-safe seats and plenty of political space to express any conscience or vision they possess. They instead follow the council strategy of studiously ignoring North Kensington. They state they are “committed to standing up for the residents of Holland Park and Notting Hill,” omitting North Kensington completely.

The Norland campaign literature is aimed squarely at those who already live in comfort. In the irrational borough, this group is attended to slavishly: “We need a council that has a record of standing up for residents and delivering more while costing less.” END_OF_DOCUMENT_TOKEN_TO_BE_REPLACED

The latest propaganda from the Kensington and Chelsea Conservatives comes in the form of a glossy A3 publication with the tagline, Community News. The Spring 2022 edition of Kensington & Chelsea News has the look of a free local newspaper but is a campaigning leaflet for the Tories ahead of next month’s council election. Its mix of policy pledges and class-conscious signaling makes clear the council’s priorities five years on from the Grenfell Tower fire. We read and analysed it so you don’t have to.

‘K & C News’ bucks the trend in these dark times by starting with a feel-good story titled “Café Society is here to stay.” The article features reassurances that locals can still object to pavement licenses being granted if noise is an issue. Even more reassuringly, K & C News informs us that Café Society will operate “from Sloane Square to Westbourne Grove,” skidding to a halt just before it gets to North Kensington. This geographical description could be a mere rhetorical flourish to name two upscale streets popular with the rich Tory voter base. Or it could be more sinister; the first signal to K & C News’s readership that the north of the borough is of little concern to the council.

The next headline is also good news but comes as a bit of a shock: “South Kensington saved by local campaign.” In my ignorance, I hadn’t known that South Kensington, the richest area in the country, faced an existential threat. The detail is that London’s Mayor, Sadiq Khan, wanted there to be a big glass building there, but heroic local (Conservative) councillors thwarted his plan. South Kensington was rescued from the jaws of Khan back in November, but this newspaper is campaign propaganda to remind core Tory voters and donors that the council remains devoted to them. For those who follow the politics of RBKC, particularly its public relations approach to the five years since the Grenfell Tower fire, it is interesting to be able to read a document that sets out their true priorities, however dressed up in deceit they might be…   END_OF_DOCUMENT_TOKEN_TO_BE_REPLACED